Thoughts During the Week of Commemoration of Vimy – April 2017

Thoughts During the Week of Commemoration of Vimy – April 2017

As we commemorate a centenary of Canada’s coming of age at Vimy, in the midst of WW1, one of the more poignant thoughts that dominates the mind, sometimes missed, is the effect on those left behind. More than 630,000 Canadians served, more than 425,000 overseas, more than 172,000 were wounded and more than 61,000 were killed in action. Each and every one of those left behind families and loved ones and so many were never to meet again.

Lt. Warren Colclough Pemberton R.F.C. first served in the Canadian Overseas Expeditionary Force and later joined the 40th Squadron RAF.  He was killed in a flying accident on 25th April 1916, aged 20. A pilot in those days took their life in hand every time they took off in rudimentary air craft that had only recently been invented.

Capt. Frederick Despard Pemberton, R.F.A. & R.F.C., 22 years old, flying over Northern France, was shot down and mortally wounded on 21st August 1917. A French farmer, Lois Milhelm, who having witnessed the crash was dismayed by the treatment of Despard’s remains and at great personal risk cleaned and buried the body and carved an oak cross to mark the grave. After the War Despard’s parents F.B. and Mab Pemberton went to France, met with Lois Milhelm and brought the wooden cross back home with them to Victoria where it is now lodged just inside the north-west wall of the Anglican Cathedral entrance.

Capt. William Dumbleton Holmes. D.S.C., M.C., 23 years old, served with the 7th Battalion, 1st British Columbia Regiment and was killed in action at Ypres on 13th June 1916. “ …on January 15th 1916, at Buckingham Palace His Majesty the King personally conferred on him the two decorations complimenting him on the fact that he was one of five men in the British Empire to receive the two coveted honours at the same time.” And the Victoria Daily Colonist of the day, recording his loss wrote “He was idolized by the men in his command… The dual decoration he won is honour shared by but few, and by no one else from Canada.” 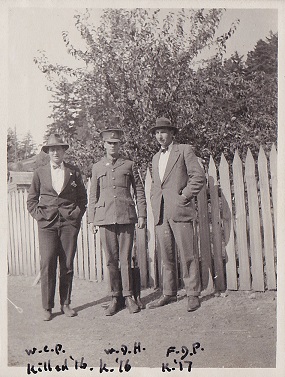 Major Henry Cuthbert Holmes, served with the Irish Guards through out the WW1, was wounded, and in recuperation in Victoria in 1917 married Philippa Pemberton, daughter of F.B. & Mab Pemberton.

Cuthbert, the sole survivor of the four young men, returned to Victoria after the War, joined the firm of Pemberton & Son. Ltd. which had been founded by J.D. & F.B. Pemberton in 1887 and, as President, changed the name to Pemberton, Holmes Ltd.

Three of the four young men were killed overseas and left vast gaps in the two families.

At an Act of Remembrance on 11 November 2000 at Honnechy Cemetery in northern France, Bill Seager included in his eulogy to Capt. F. Despard Pemberton the following;

“We knew he was a native of Canada, born in Victoria, British Columbia, and that he must have considered it his duty, like many of his countrymen, to travel halfway across the world to fight in the Great War for Civilization – as it later became known, To his parents the tragedy of his death must have been particularly hard to bear, since it followed the death of Warren his younger brother and a pilot of 40th Squadron, who had been killed just over a year before whilst flying a training craft in England.”

In 1942, Cuthbert Holmes, writing a letter after learning from his younger son Pip that he was joining up with the RAF, and who had seen his eldest son Desmond off to Europe for WW2 only a year earlier, wrote:

Pip, who will be 18, next week, told us quietly this evening he would leave College & go in the R.A.F. in a few weeks.

How we shut away these thoughts till they come over the edge and crowd us into reality.

My mind goes to his three uncles who lie in Flanders: Wildy under the ramparts of Ypres, the city he did so much to hold: Despard near the softer Somme, an English name among French & Fleming & Germans, his coffin a foot longer than others: Warren, great in soul & body and lovely in face until the searing flames scarred him.

Again, I find myself saying over and over, searching peace in agony- “thy will be done”. When Desmond drove away from me last year, from the walls of the Toronto’s Art Gallery where he & I spent a last part of an hour, I found peace at last in those words.

My mind moves to my Mother & my Father and their years of waiting and their heavenly faith and courage. She spoke of Wildy & to him almost every night. I also remember Mrs. Pemberton when the news came her eldest boy was dead, after months of waiting. I never thought human voice could be so agonized. And then, (two years ago,) when her last & youngest went in this war her gallant heart beat a few more days and stopped.

And now my poor Philippa, as millions of others (mothers), faces the same fate….

Amazingly Major H. Cuthbert Holmes in WW1 and both Pip & Desmond survived W.W.2. Desmond went on to serve a full career with the Royal Engineers before retiring to Victoria in 1967 and his second career with Pemberton Holmes Ltd. And Pip, returning from W.W.2 followed his father Cuthbert into Pemberton Holmes Ltd and served as President through to 1982.

Today in 2017, 100 years since Vimy Ridge and “Canada’s coming of age”, 130 years since the start of Pemberton Holmes Ltd., and 150 years since Confederation we must always remember those who gave their lives leaving their families bereft and the seemingly insurmountable task of moving-on amidst the pain of loss.